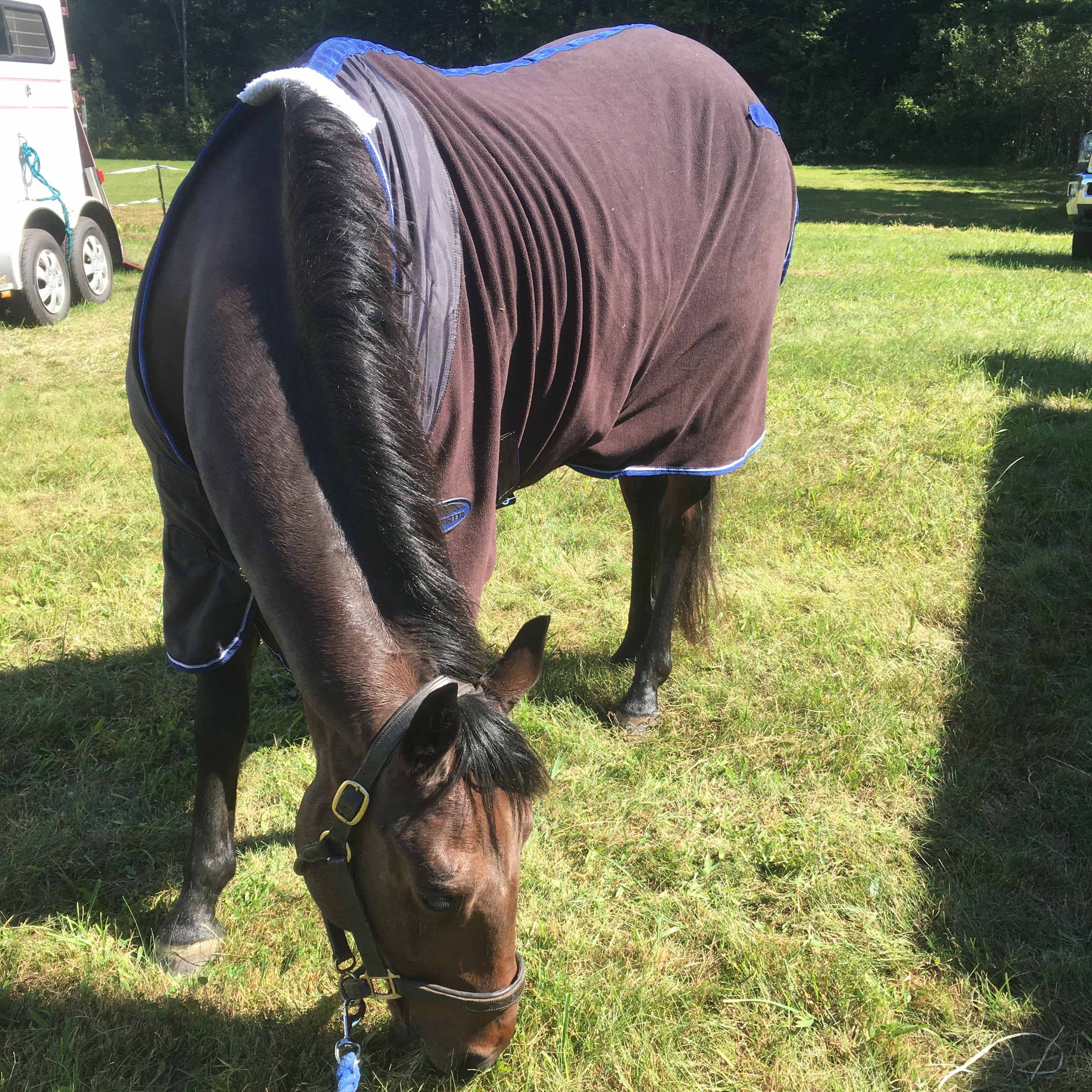 Reuben joined our heard early last December as an Endurance/Competitive Trail Prospect, and spent the winter in light work before jumping into a full training schedule in the spring. Having just turned six, we wanted him to have a slow introduction to the sport, but also wanted him to get some miles and experience before heading into the summer season. Unfortunately with the closures due to COVID, we ended up with a slightly lighter schedule than we had originally planned! Once restrictions allowed, we were able to truck off farm for some casual (and socially distant!) trail rides with friends, but didn’t manage to make it to our first official competition before the end of September. This was a bonus in that Reuben was very fit and had an a few more off property trips under his belt, but it also meant much cooler weather.

We loaded up before the sun was even up, and the temperature was barely at 30 degrees. Reuben was wrapped and ready to go, and I threw his WeatherBeeta Standard Neck Fleece Cooler on for the ride. He’s gotten pretty accustom to traveling alone, but can still get a little anxious during trips, so I wanted to ensure that he stayed warm and dry if he were to sweat at all during the trip. We unloaded (still in the dark!) after the hour and a half trailer ride and the cooler was definitely a good call – I could tell from the moisture on the cooler that he had been sweating a little from the stress of traveling alone, but the fleece had pulled the moisture away from his body, keeping him warm and dry underneath. The nylon overlay at the shoulder allowed the cooler to comfortable move with him as we walked around the grounds, and the anti-pill finish helped shed shavings and dust from the trailer, making him look sharp and well presented for his debut appearance!

Our riding partner and mentor arrived shortly after we settled in, and we vetted in and were on the trail before mid morning. Considered short by Competitive Trail Ride (CTR) standards, we were riding in what is considered a CDR (Conditioning Distance Ride), at only 15 miles, to help introduce Reuben and get a feel for how he would handle the day. CTRs and CDRs are a form of distance riding slightly different from endurance, in which horses and riders go out on the trail at spaced intervals, and are allowed an allotted window of time to finish the given milage. The horses are evaluated by a vet and lay judge before and after the ride with an extensive score sheet, and judging based on how little the horse’s condition changes from start to finish. With COVID guidelines in place, the competition was somewhat modified, making it a perfect low-key start to Reuben’s career.

Despite the “short” distance, we had to be cautious to pace ourselves given the weather and milage, ensuring that the horses didn’t overheat and then catch a chill. For longer milage rides there are generally “holds” mid ride to check the horse’s health, but for the shorter milage we made only quick stops to allow the horse to drink and graze, sponging them off lightly as the temperature warmed up. We returned to base camp just within the maximum 3 hour and 30 minute window, and had  20 minutes to allow the horses to cool before having to get official checks for pulse and respiration. We immediately began sponging, toweling, and currying the horses to help them dry, and Reuben’s cooler went right on.

He was definitely happy to have the fleece back on, and it helped immensely with the cooling process. The lightweight material was easy to maneuver, allowing me to brush and towel underneath, while still keeping his muscles warm after such a long workout. He pulsed in at resting rate – which was impressive for his first outing! The wind and cold picked back up over the afternoon, so Reuben stayed bundled up as he enjoyed some extra after ride snacks to relax before heading back home. This cooler has definitely proven itself to be a key addition to our ride wardrobe!